Users of H2O are advised to update immediately.

Version 2.0.3 is a maintenance release fixing issues found since the release of 2.0.2.

Version 2.1.0-beta2 introduces many features in addition to those introduced in 2.1.0-beta1, including mruby-based DSL for access control and DoS mitigation.

Please let us know if you find any issues in the beta release. We plan to release final version of 2.1.0 pretty soon.
投稿者 Kazuho Oku 時刻: 12:55 PM 41 comments:

Version 2.0.1 is a bug-fix release of the 2.0 series. Existing users can upgrade to the new version to avoid the issues listed in the changeling.

Version 2.1.0-beta1 is the first beta release of 2.1, with a new throttle-response handler for per-response bandwidth throttling, and an enhancement to the status handler (pull #893). It also includes two new features that improve HTTP/2 performance: TCP latency optimization and support for link: rel=preload headers in informational response (pull #916).

With TCP latency optimization, users can expect 1 RTT or more reduction in time-to-render if the main resource (i.e. HTML) is much larger INITCWND (typically ~15KB).

The reduction comes from the fact that with the optimization enabled, H2O tries to keep the amount of HTTP/2 frames kept unsent in the TCP send buffer very small (to just two packets) during the slow-start phase. Since the amount of data unsent is kept small, the server can switch to sending a resource that blocks the rendering path (e.g. CSS) immediately when it receives a request for such resource, instead of pushing the HTML body stored in the TCP send buffer. As CWND grows, the connection handling switches to bandwidth-optimization mode, that pre-fills more data into the send buffer so that the kernel can send additional data immediately after receiving ACKs without user-space intervention.

Support for link: rel=preload headers in informational response helps web developers utilize HTTP/2 push. Use of the link header is becoming the standard way to instruct HTTP/2 servers to start pushing assets. The downside of the approach is that application servers typically cannot send the header until it generates the final response. Generation of the final response often involves time-consuming operations such as access to the database, keeping the HTTP/2 connection idle for that period.

Details of the two optimizations were covered in my presentation at Tokyo RubyKaigi 11. The slides are shown below:

We are happy to announce the release of H2O version 2.0.

It is a major update from 1.7 series, including many improvements and bug fixes.

The most prominent changes are:Full list of changes can be found here. Please refer to the reference documentation to find out how to use them.

The releases include a fix for a security issue (CVE-2016-4817). Existing users are encouraged to update their installations.

The details of the issue can be found here.

We would like to thank Tim Newsham for reporting the issue and Frederik Deweerdt for providing a fix.
投稿者 Kazuho Oku 時刻: 12:22 PM 30 comments:

In addition to the fix, 2.0.0-beta3 includes many new features and bug fixes.

Especially, support for reverse-proxying over HTTPS (#875) and the new configuration directives for tweaking environment variables passed to FastCGI (#868) might be helpful to the users who have wanted them.

We plan to release the final version of 2.0 soon, and then proceed to optimizing the server even further. Stay tuned!
投稿者 Kazuho Oku 時刻: 2:34 PM 25 comments:

Today I am happy to announce the release of H2O HTTP/2 server version 2.0.0-beta2.

The release comes with the new status handler that shows the HTTP requests in-flight. Now, you can monitor what's going on inside H2O!

Some notable features are: 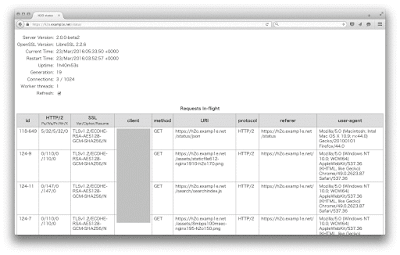 Under the hood, the status is served via a JSON API (lib/handler/status.c L169), and rendered by a static HTML document(share/h2o/status/index.html). So it would be easy for anyone to extend the status or retrieve and use the status from another program.

The documentation of the status handler can be found here.
投稿者 Kazuho Oku 時刻: 5:11 PM 51 comments:

As the developer of H2O, the lack of ability to define a mapping for a specific path (not a directory) has been one of the complaints I hear the most. Finally, we have a fix for the issue, and that is why the next release will be given the number 2.0.

Starting from H2O version 2.0.0beta-1, it is possible to write a configuration like the following. The example maps all requests to a FastCGI server, with the exception of /robots.txt and /favicon.ico being served statically.
Pretty straight forward, isn't it?

For details, please refer to the updated documentation of paths directive, or refer to the discussion in the pull request.
投稿者 Kazuho Oku 時刻: 12:16 PM 23 comments:

Today, I am happy to announce the release of H2O version 2.0.0-beta1, the first release of the 2.0 series. In the release, we have added support for Brotli in two ways.

For those who do not know, Brotli is a new compression method developed by Google. It is said to compress files ~20% smaller than gzip - means less bandwidth consumed and faster rendering on the client side. Mozilla has already added support for Brotli in Firefox 44, and Chrome is gradually turning the knob on as well.

Starting with H2O version 2.0.0-beta1, when the file.send-compressed directive is set to ON, the server sends a file with .br or .gz suffix instead of file being requested should such file exist. For example, if index.html is requested with a Accept-Encoding: br request header, and if a file named index.html.br exists, the server sends the contents of index.hmtl.br as the response with the Content-Encoding: br response header being set. In case the client is capable of decompressing both algorithms both algorithms and if both of .br and .gz files exist, the .br file is selected as the response.

The other directive: compress controls on-the-fly compression. When turned on, it compresses the response as it is being sent to the client, using either brotli or gzip depending on the configuration and browser support. This can be used for compressing output from PHP and other dynamically-generated content.
Server administrators may also be interested in fine-tuning the compression quality of the compression methods. The following configuration sets the compression quality of brotli to 4 and gzip to 6, a suggested setting by Understanding Brotli's Potential - The Akamai Blog. The compression speed becomes about half of the default (1 for both gzip and brotli), but the size of the content after compression is expected to become ~15% smaller for both methods.

In my upcoming blogposts I will cover other changes in the 2.0 release of H2O. Stay tuned!
投稿者 Kazuho Oku 時刻: 12:35 PM 40 comments:

It includes several bug fixes and stability improvements from 1.7.0. Users of existing versions are recommended to upgrade to 1.7.1.

Major additions in this update are:

You can find more detailed description of the additions in my previous blogpost: H2O version 1.7.0-beta1 released with enhanced mruby scripting, CGI, and much more. And along with the new features, we have also enabled the use of Neverbleed by default, to reduce the risk of private key disclosure in case of a vulnerability.

We have also updated the numbers of the request-per-seconds benchmark.

I have seen many people hesitating to move to HTTPS or HTTP/2 in fear of performance issues. But what is apparent from this benchmark is that the performance of HTTP/2 with TLS is actually on par with HTTP/1 without TLS (in case of nginx) or much faster (in case of H2O).

Details of the benchmark (along with other benchmarks) can be found at h2o.examp1e.net/benchmarks.html.
投稿者 Kazuho Oku 時刻: 2:51 PM 176 comments:

I have just released H2O version 1.6.2 that includes a fix for a response splitting vulnerability found in prior releases.

Users using the redirect directive are affected; they are advised to update immediately.

Edit: version 1.7.0-beta3 has also been released fixing the same issue in the earlier releases of 1.7.0 beta series.

Today I am happy to announce that we have tagged the 1.7.0-beta1 release of H2O HTTP2 server. Among the changes, there are few ones that should be noted.

In 1.7, mruby support has ben enhanced so that handlers written in mruby can issue HTTP requests. And it is damn simple. Shown below is a full-fledged reverse proxy implementation using mruby.
H2O exports one ruby method named http_request. It takes a URL and a hash of optional parameters (e.g. method, headers, body) as the arguments, and returns immediately a handle to the request. All the network operations are handled asynchronously in the event loop of H2O.

When the mruby code calls the #join method, it returns a Rack response, either immediately (if available), or when the response headers become available. The returned body (3rd element of the response array) is an object that responds to #each; calling the method will yield the chunks of an HTTP response as they arrive.

Using the asynchronous nature of the HTTP client interface, it is possible to implement sophisticated server-side logic like Edge-side includes in very few lines of code; hopefully I will cover that in a different post.

A FastCGI-to-CGI gateway script is included in the distribution. As shown in the example below, it is easy to create per-extention mapping to the gateway script to run CGI applications as they do on the Apache HTTP server.
It also has the flexibility to limit the number of CGI processes running concurrently (by using --max-workers option), or to run CGI applications under different directories with different user privileges by specifying appropriate user names for each directory-level fastcgi.spawn configuration.

The distribution also bundles a basic authenticator written in mruby. The configuration snippet below will be enough to understand how it should be configured.
The script will also be a good reference for people learning how to write mruby handlers for H2O.

The server finally supports wild-card hostnames as well, which is essential if you have multiple wild-card certificates to be used.
投稿者 Kazuho Oku 時刻: 2:38 PM 19 comments: