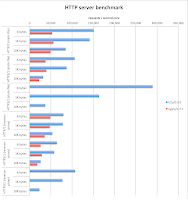 PS. It is also great that the tools developed by H2O is causing other effects; not only have we raised the bar on HTTP/2 server performance (nghttp2 (a de-facto reference implementation of HTTP/2) has become much faster in recent months), the performance race of HTTP/1 parser has once again become (Performance improvement and benchmark by indutny · Pull Request #200 · joyent/http-parser, Improving PicoHTTPParser further with AVX2), @imasahiro is working on merging qrintf (a preprocessor that speeds up the sprinf(3) family by a magnitude developed as a subproduct of H2O) to Clang. Using H2O as a footstep, I am looking forward to bringing in new approaches for running / maintaining websites next year.
投稿者 Kazuho Oku 時刻: 5:44 AM 314 comments:

This blogpost (as part of the H2O Advent Calendar 2014) provides a high-level overview of the memory management functions in H2O that can be categorized into four groups.

They are wrappers of malloc(3) / realloc(3), that calls abort(3) if memory allocation fails. The returned chunks should be freed by calling free(3).

The functions create, clear, and allocate from a memory pool. The term memory pool has several meanings, but in case of H2O the term has been borrowed from Apache; it refers to a memory allocator that frees all associated chunks at once when the destructor (h2o_mem_clear_pool) is being called.

The primary use-case of the functions is to allocate memory that relates to a HTTP request. The request object h2o_req_t has a memory pool associated to it; small chunks of memory that need to be allocated while handling a request should be obtained by calling h2o_mem_alloc_pool instead of h2o_mem_alloc, since the former is generally faster than the latter.

The functions are used for handling things like headers transferred via HTTP/2, or to for associating a resource that needs a custom dispose callback to a HTTP request through the use of the memory pool.

The functions provide access to buffer, that can hold any length of octets. They internally use malloc(3) / realloc(3) for handling short buffers, and switch to using temporary-file-backed mmap(2) when the length of the buffer reaches a predefined threshold (default: 32MB). A buffer can also be associated to memory pool by calling the h2o_buffer_link_to_pool function.

The primary use-case of the buffer is to store incoming HTTP requests and POST contents (as it can be used to hold huge chunks on 64-bit systems since it switches to temporary-file-backed memory as described).

The function reserves given number of slots for H2O_VECTOR which is a variable length array of an arbitrary type of data. Either h2o_mem_realloc or the memory pool can be used as the underlying memory allocator (in the former case, the allocated memory should be manually freed by the caller). The structure is initialized by zero-filling it.

The vector is used everywhere, from storing a list of HTTP headers to a list of configuration directives.

For details, please refer to their doc-comment and the definitions in include/h2o/memory.h and lib/memory.c.
投稿者 Kazuho Oku 時刻: 8:58 AM 40 comments:

As suggested in the doc-comment of the function (shown below), the function is designed to decode the data in-place. In other words, it is not copy-less.
It is intentionally designed as such.

Consider a input like the following. The example is more than 2MB long even though it contains only 2 bytes of data. The input is conformant to the HTTP/1.1 specification since it does not define the maximum length of the chunked extensions, requires every conforming implementation to ignore unknown extensions.
To handle such input without getting the memory exhausted, a decoder should either a) only preserve the decoded data (requires a copy), or b) limit the size of the chunked-encoded data.

B might have been easier to implement, but such a feature might be difficult to administer. So I decided to take the route a, and for simplicity implemented the decoder to always adjust the position of the data in-place.

Always calling memmove for adjusting the position might induce some overhead, but I assume it to be negligible for two reasons: both the source and destination would exist in the CPU cache / the overhead of unaligned memory access is small on recent Intel CPU. PicoHTTPParser is a tiny but very fast HTTP parser library known for its use by many Perl applications. In the slides I used last month, I suggested it could be even faster if SIMD instructions were used. Now the feature is available thanks to @herumi.

The library now uses the PCMPESTRI instruction which is part of SSE 4.2, running 68% to 90% faster.


PCMPxSTRx is a SIMD instruction that can be used for parsing text. In _SIDD_CMP_RANGES mode, it checks at most 16 bytes at once, if each byte is within given set of ranges. Herumi and I have created a wrapper function for the instruction named findchar_fast that iterates though every 16 bytes of a given buffer to find the first occurrence of a byte within a set of given ranges.

And the function is merged neatly into the parser; the code below at first uses the SIMD function to look for a control character (the match condition is defined as ranges1), then falls back to the non-SIMD code to handling up to 15 remaining characters (that cannot be processed by the SIMD function due to out-of-bounds access).
To summarize, PCMPxSTRx is an excellent instruction for performance that can be cleanly integrated into existing parsers (tokenizers). Hopefully we will see performance improvements in various parsers in the future through the use of the instruction.

This blog post has been written as part of the H2O Advent Calendar.
投稿者 Kazuho Oku 時刻: 6:51 PM 266 comments: